Photosynthesis drives yields, but in cold conditions, this process that turns sunlight into biomass takes a hit. Miscanthus is a popular, sustainable, perennial feedstock for bioenergy production that thrives on marginal land in temperate regions.

A new study in GCB Bioenergy from the University of Illinois and Aarhus University assessed Miscanthus collected on a Siberian expedition to identify three new accessions (a term for plants collected from a particular area) with exceptional photosynthetic performance in chilling temperatures that outstrip the industry favorite. 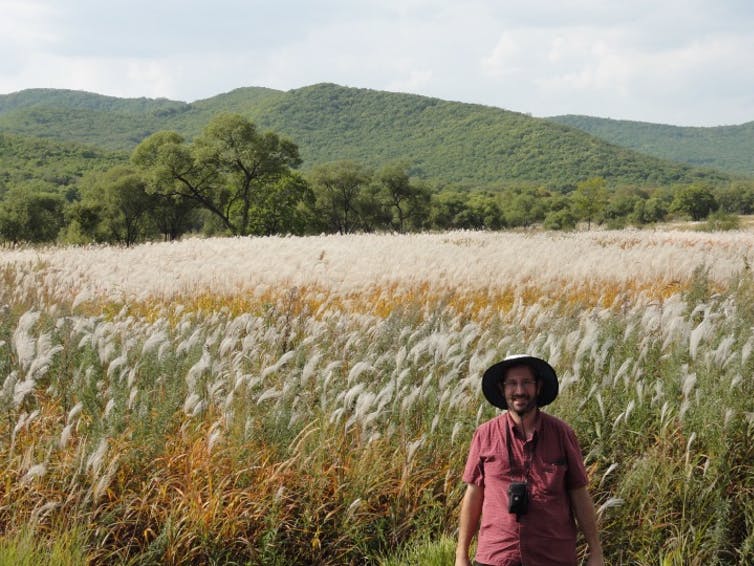 In Eastern Siberia, Professor Erik Sacks collected cultivars of Miscanthus—a popular, low-input, perennial bioenergy feedstock. A new study from the University of Illinois found three Miscanthus plants that have exceptional photosynthetic performance in chilling temperatures, which will be used to breed improved varieties.

"When an arctic vortex hits, we have the luxury to bundle up and stay indoors," said Stephen Long, the Ikenberry Endowed University Chair of Crop Sciences and Plant Biology at Illinois' Carl R. Woese Institute for Genomic Biology. "Miscanthus stays in the ground year-round, and in the spring, regrows from belowground stems to produce biomass that can be turned into a sustainable source for bioenergy and bioproducts --but to survive, it has to withstand and remain productive in a wide range of weather conditions including chilling temperatures between 15 - 0 °C [59 - 32 °F]."

Today, a sterile clone of the hybrid of Miscanthus sacchariflorus and Miscanthus sinensis called Miscanthus x giganteus 'Illinois' is considered one of the best bioenergy feedstocks available due to its ability to thrive on marginal land, withstand chilling temperatures, and produce 59 percent more biomass than corn. Its sterility prevents it from producing viable seed and becoming invasive but also means it cannot be used to breed new lines. This requires new hybridizations of the parent lines, which provides the opportunity to add more chilling tolerance.

Scientists from Illinois, the U.S. Department of Agriculture, and Russia's N.I. Vavilov Research Institute of Plant Industry (VIR) led an expedition to Eastern Siberia, the coldest region where Miscanthus grows, to find wild populations of M. sacchariflorus that could be used to breed improved M. x giganteus hybrids. In this study, the team winnowed down 181 Siberian Miscanthus accessions to the top three that photosynthesized better than M. x giganteusduring chilling.

"M. x giganteus has been touted as having exceptional photosynthetic cold tolerance compared to other species such as corn," said first-author Charles Pignon, a postdoctoral researcher at Illinois, who led this work. "We were excited to find other accessions that did so much better at low temperatures."

"Now I am working on breeding these highly cold-tolerant accessions with other forms of Miscanthus in order to form new hybrid cultivars that hopefully will be more effective, productive, and resilient in the field," said co-author Erik Sacks, an associate professor of crop sciences in the College of Agricultural, Consumer and Environmental Sciences at Illinois. "But the ultimate goal of our work is to provide consumers with a sustainable, plant-derived source of energy."

This article originally appeared on the IGB website, EurekAlert and several others: