The top leaves of crops absorb far more light than they can use, starving lower leaves of light. Scientists designed plants with light green leaves with hopes of allowing more light to penetrate the crop canopy and increase overall light use efficiency and yield. This strategy was tested in a recent modeling study that found leaves with reduced chlorophyll content do not actually improve canopy-level photosynthesis, but instead, conserve a significant amount of nitrogen that the plant might be able to reinvest to improve light use efficiency and increase yield. 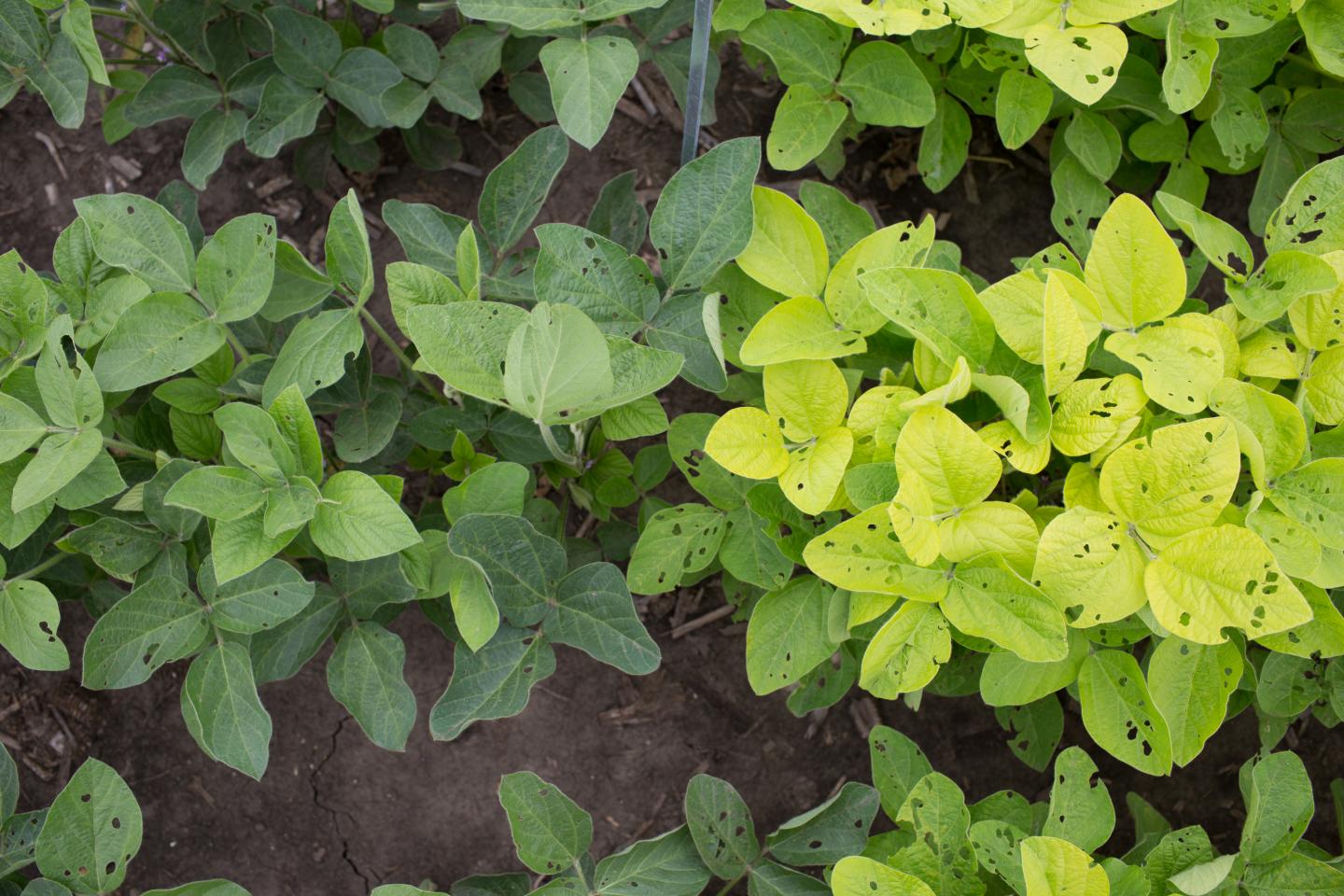 "Leaves up at the top of the canopy are really greedy--they absorb a lot of light and don't let much down to their brothers and sisters below them," said Berkley Walker, an Alexander von Humboldt Postdoctoral Fellow at the University of Düsseldorf, who led this work supported by Realizing Increased Photosynthetic Efficiency (RIPE). "Leaves up at the top aren't very efficient with that light energy, but the leaves at the bottom are very efficient. So, if you could just take some of that light that's being hogged up at the top, and move it down deeper into the canopy, theoretically, you'd have a more efficient canopy."

Published in Plant Physiology, researchers tested this idea using a computer simulation incorporating data from nearly 70 varieties of soybeans with varying levels of chlorophyll from the U.S. Department of Agriculture germplasm bank. They found that plants with 20 percent less chlorophyll theoretically require 9 percent less nitrogen with no penalty to carbon gain (biomass) and yield.

"The simulation reveals that the complex interior structure of leaves causes the light to bounce around so much that the light has the same probability of going up as it does going down," said RIPE Deputy Director Don Ort, a physiologist with the USDA/ARS Photosynthesis Research Unit and the Robert Emerson Professor of Plant Biology and Crop Sciences at the Carl R. Woese Institute for Genomic Biology at the University of Illinois.

"When we decrease chlorophyll, more light is lost to reflection, and we don't get the full benefits of getting light deeper into the canopy where it can be absorbed."

Next, they are exploring if these nitrogen savings could be used to fix other photosynthetic bottlenecks as well as other ways to increase light penetration into the canopy.

"It's not case closed on light green plants, but the strategy is going to be a little more nuanced than just putting plants out there with lower chlorophyll content," Walker said. "We need to explore if light green can be combined with changes in leaf architecture or if we can re-engineer leaves to be thinner to reduce light reflectance and improve transmittance."

Other RIPE-funded work that modeled a decrease in chlorophyll content in rice found that reallocating these nitrogen savings could improve canopy photosynthesis and nitrogen use efficiency by 30 percent.

"Manipulation of leaf chlorophyll content is one exciting option to explore both increased energy and light use efficiencies," said collaborator Xinguang Zhu of the Chinese Academy of Sciences. "This study shows that gaining the desired benefit requires a more thorough understanding of the leaf optical properties and nitrogen distribution patterns among photosynthetic proteins in a leaf."

This article originally appeared on the IGB website and Phys.org.