Recent research has shown that rising carbon dioxide levels will likely boost yields, but at the cost of nutrition. A new study in Plant Journal from the University of Illinois, U.S. Department of Agriculture Agricultural Research Service (USDA-ARS), and Donald Danforth Plant Science Center suggests that this is an incomplete picture of the complex environmental interactions that will affect crops in the future—and rising temperatures may actually benefit nutrition but at the expense of lower yields. 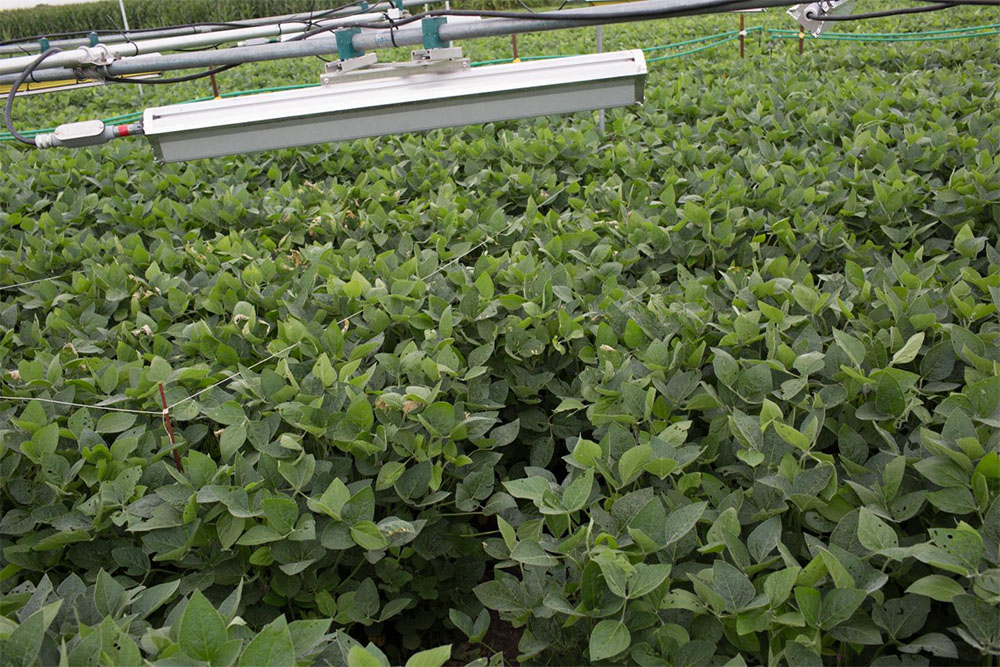 Two years of field trials show that increasing temperatures by about 3 degrees Celcius may help preserve seed quality, offsetting the effects of carbon dioxide that make food less nutritious. In soybeans, elevated carbon dioxide levels decreased the amount of iron and zinc in the seed by about 8 to 9 percent, but increased temperatures had the opposite effect.

“Iron and zinc are essential for both plant and human health,” said Ivan Baxter, a principal investigator at the Danforth Center. “Plants have multiple processes that affect the accumulation of these elements in the seeds, and environmental factors can influence these processes in different ways, making it very hard to predict how our changing climate will affect our food.”

“This study shows that a trade-off between optimizing yields for global change and seed nutritional quality may exist,” said co-principal investigator Carl Bernacchi, a scientist at the USDA-ARS, which funded the research along with the USDA National Institute of Food and Agriculture.

The team tested the soybeans in real-world field conditions at the Soybean Free-Air Concentration Experiment (SoyFACE), an agricultural research facility at Illinois that is equipped to artificially increase carbon dioxide and temperature to futuristic levels.

“It’s a very controlled way of altering the growing environment of crops in agronomically relevant situations where the plants are planted and managed exactly like other fields in the Midwestern United States,” Bernacchi said, who is also an assistant professor of plant biology and crop sciences at Illinois’ Carl R. Woese Institute for Genomic Biology and a member of the Genomic Ecology of Global Change research theme and the Center for Advanced Bioenergy & Bioproducts Innovation.

Next, they plan to design experiments to figure out the mechanisms responsible for this effect.

The open-access paper "Increased temperatures may safeguard the nutritional quality of crops under future elevated CO2 concentrations" is published by the Plant Journal (DOI: 10.1111/tpj.14166) and available online or by request. Steven Huber and Iris H. Köhler are co-authors on this work.

Established in 2007, the Carl R. Woese Institute for Genomic Biology (IGB) is an interdisciplinary institute dedicated to transformative research and technology in life sciences using team-based strategies to tackle grand societal challenges. The IGB serves as a centralized location for biological and biotechnological research at the University of Illinois at Urbana-Champaign, with work ranging from basic research that expands the horizons of human knowledge to applied research that builds on this foundational knowledge to create new technologies.

Founded in 1998, the Donald Danforth Plant Science Center is a not-for-profit research institute with a mission to improve the human condition through plant science. Research, education and outreach aim to have impact at the nexus of food security and the environment, and position the St. Louis region as a world center for plant science. The Center's work is funded through competitive grants from many sources, including the National Institutes of Health, U.S. Department of Energy, National Science Foundation, and the Bill & Melinda Gates Foundation. Follow us on Twitter at @DanforthCenter.

This article originally appeared on the IGB website, EurekAlert, NewsWise, Phys.org, and ScienceDaily.