An international team is using advanced tools to develop crops that give farmers more options for sustainably producing more food on less land. To do this, thousands of plant prototypes must be carefully analyzed to figure out which genetic tweaks work best. Today, in a special issue of the journal Remote Sensing of Environment, scientists have shown a new technology can more quickly scan an entire field of plants to capture improvements in their natural capacity to harvest energy from the sun.

“The method we developed allows us to measure improvements we have engineered in a plant’s photosynthesis machinery in about ten seconds, compared to the traditional method that takes up 30 minutes,” Katherine Meacham-Hensold, a postdoctoral researcher at the University of Illinois, who led this work for a research project called Realizing Increased Photosynthetic Efficiency (RIPE). “That’s a major advance because it allows our team to analyze an enormous amount of genetic material to efficiently pinpoint traits that could greatly improve crop performance.” 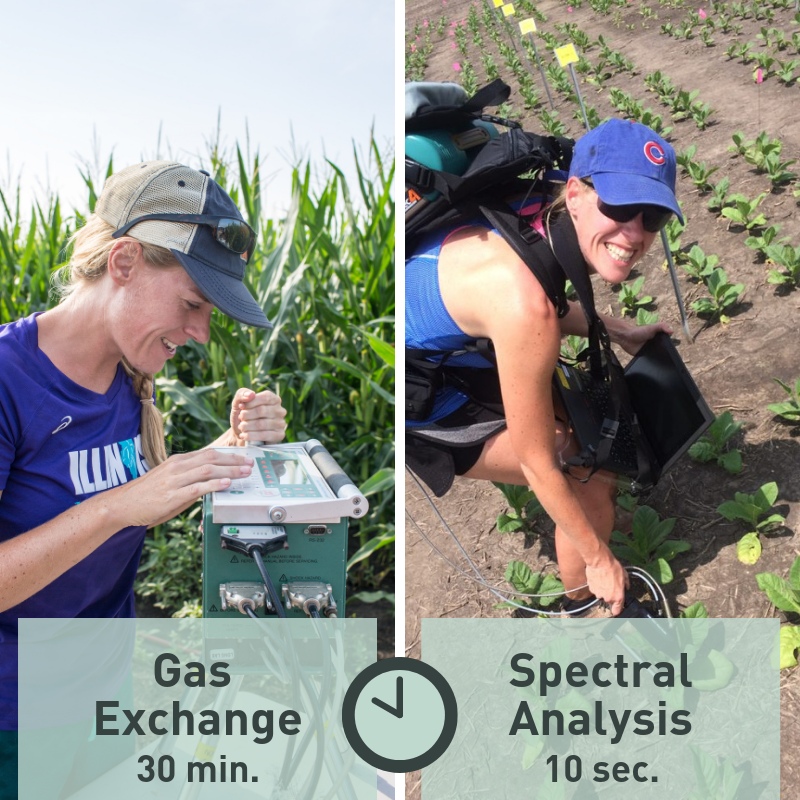 Scientist Katherine Meacham (pictured) and an international team have found a method that allows them to measure improvements they have engineered in a plant’s photosynthesis machinery much faster. Credit: RIPE Project

RIPE, which is led by Illinois, is engineering crops to be more productive by improving photosynthesis, the natural process all plants use to convert sunlight into energy and yield. RIPE is supported by the Bill & Melinda Gates Foundation, the Foundation for Food and Agriculture Research (FFAR), and the U.K. Government’s Department for International Development (DFID).

The traditional method for assessing photosynthesis analyzes the exchange of gases through the leaf; it provides a huge amount of information, but it takes 30 minutes to measure each leaf. A faster, or “higher-throughput” method, called spectral analysis, analyzes the light that is reflected back from leaves to predict photosynthetic capacity in as little as 10 seconds.

“The question we set out to answer is: can we apply spectral techniques to predict photosynthetic capacity when we have genetically altered the photosynthetic machinery,” said RIPE research leader Carl Bernacchi, a scientist with the U.S. Department of Agriculture, Agricultural Research Service, who is based at Illinois’ Carl R. Woese Institute for Genomic Biology. “Before this study, we didn’t know if changing the plant’s photosynthetic pathways would change the signal that is detected by spectral measurements.”

Scientists analyze thousands of plants in field trials like this to figure out which genetic tweaks work best to boost crop yield. Now they can use a measurement technique that takes 10 seconds—rather than 30 minutes—to assess genetically modified crops. Credit: Beau Barber/University of Illinois

Although they can prove this method can be used to screen crops that have been engineered to improve photosynthesis, researchers have not uncovered what spectral analysis measures exactly. “Spectral analysis requires custom-built models to translate spectral data into measurements of photosynthetic capacity that must be recreated each year,” Meacham said. “Our next challenge is to figure out what we are measuring so that we can build predictive models that can be used year after year to compare results over time.”

“While there are still hurdles ahead, spectral analysis is a game-changing technique that can be used to assess a variety of photosynthetic improvements to single out the changes that are most likely to substantially, and sustainably, increase crop yields,” said RIPE executive committee member Christine Raines, a professor of plant molecular physiology at the University of Essex, whose engineered crops were analyzed with the technique. “These tools can help us speed up our efforts to develop high-yielding crops for farmers working to help feed the world.”

This article originally appeared on the RIPE website, EurekAlert, and several others: