Photosynthesis is the natural process plants and algae utilize to capture sunlight and fix carbon dioxide into energy-rich sugars that fuel growth, development, and in the case of crops, yield. Algae evolved specialized carbon dioxide concentrating mechanisms (CCM) to photosynthesize much more efficiently than plants. This week, in the journal Proceedings of the National Academy of Sciences, a team from Louisiana State University (LSU) and the University of York report a long-time unexplained step in the CCM of green algae—which is key to develop a functional CCM in food crops to boost productivity.

“Most crops are plagued by photorespiration, which occurs when Rubisco—the enzyme that drives photosynthesis—cannot differentiate between life-sustaining carbon dioxide and oxygen molecules that waste large amounts of the plant’s energy,” said James Moroney, the Streva Alumni Professor at LSU and member of Realizing Increased Photosynthetic Efficiency (RIPE). “Ultimately, our goal is to engineer a CCM in crops to surround Rubisco with more carbon dioxide, making it more efficient and less likely to grab oxygen molecules—a problem that is shown to worsen as temperatures rise.”

Led by the University of Illinois, RIPE is an international research project that is engineering crops to be more productive by improving photosynthesis with support from the Bill & Melinda Gates Foundation, the U.S. Foundation for Food and Agriculture Research (FFAR), and the U.K. Government’s Department for International Development (DFID).

Whereas carbon dioxide diffuses across cell membranes relatively easily, bicarbonate (HCO3-) diffuses about 50,000 times more slowly due to its negative charge. The green algae Chlamydomonas reinhardtii, nicknamed Chlamy, transports bicarbonate across three cellular membranes into the compartment that houses Rubisco, called a pyrenoid, where the bicarbonate is converted back into carbon dioxide and fixed into sugar. 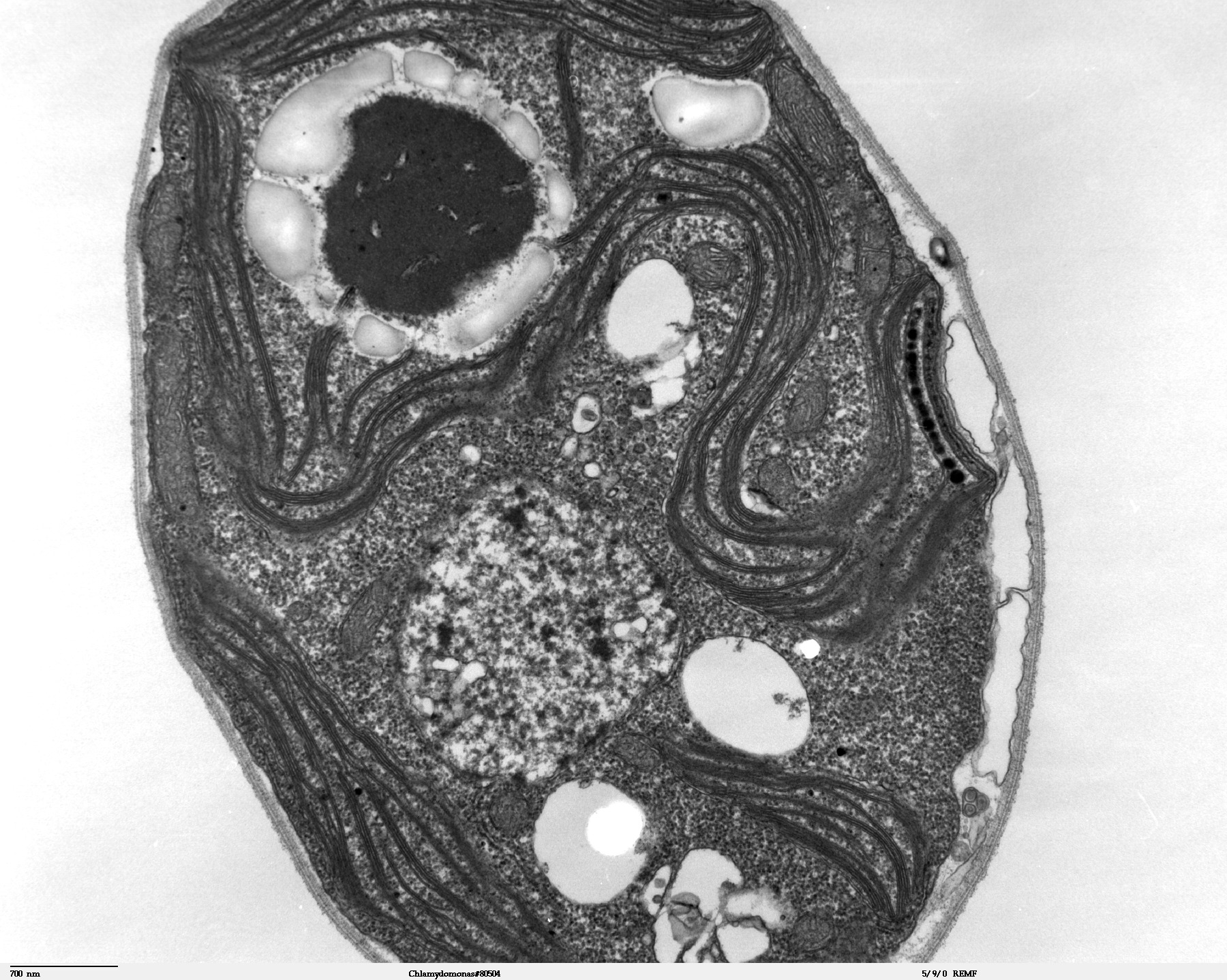 A recent study discovered a missing link in the photosynthetic process of green algae called Chlamydomonas reinhardtii (pictured) that could be used to boost crop productivity.

“Before now, we did not understand how bicarbonate crossed the third threshold to enter the pyrenoid,” said Ananya Mukherjee, who led this work as a graduate student at LSU before joining the University of Nebraska–Lincoln as a postdoctoral researcher. “For years, we tried to find the missing component, but it turns out there are three transport proteins involved in this step—which were the missing link in our understanding of the CCM of Chlamydomonas reinhardtii.”

“While other transport proteins are known, we speculate that these could be shared with crops more easily because Chlamy is more closely related to plants than other photosynthetic algae, such as cyanobacteria or diatoms,” said Luke Mackinder, a lecturer at York who collaborated with the RIPE team on this work with support from the Biotechnology and Biological Sciences Research Council (BBSRC) and the Leverhulme Trust.

Creating a functional CCM in crops will require three things: a compartment to store Rubisco, transporters to bring bicarbonate to the compartment, and carbonic anhydrase to turn bicarbonate into carbon dioxide.

In a 2018 study, RIPE colleagues at The Australian National University demonstrated that they could add a compartment called a carboxysome, which is similar to a pyrenoid, in crops. Now this study completes the list of possible transport proteins that could shuttle bicarbonate from outside the cell to this carboxysome structure in crops’ leaf cells.

“Our research suggests that creating a functional CCM in crops could help crops conserve more water and could significantly reduce the energy-taxing process of photorespiration in crops—that worsens as temperatures rise,” Moroney said. “The development of climate-resilient crops that can photosynthesize more efficiently will be vital to protecting our food security.”

This article originally appeared on the RIPE website, EurekAlert, and several others:

Boost soybean yields by adapting photosynthesis to fleeting shadows, according to model